Make your fort on the beach and attack enemy islands 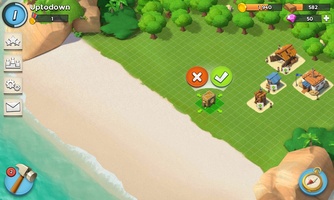 Advertisement
Boom Beach is a real-time strategy game that was developed by Supercell (creators of the popular (Clash of Clans). Players can create their own fort on a Pacific island and attack enemy islands in exciting mass battles.

The gameplay is very similar to Clash of Clans: players have to create their own base near the beach of their own island and attack enemy islands in order to obtain a variety of rewards.

Even though you are fighting against the Blackguard, the enemy army is controlled by a computer. In Boom Beach, you can also fight against other players on the internet. You just have to attack their islands and try to overcome their defenses with your troops.

In Boom Beach, players will find more than ten different types of defensive buildings and different attack units. They can be combined in a myriad of different ways in order to achieve the best balance between attack and defense.

Boom Beach is a simple, but addictive, real-time strategy game that has fantastic graphics. In addition, it moves away from the classic fantasy setting in order to offer a world full of soldiers with machine guns, missiles and motorized boats.
The best alternatives to Clash of Clans available in 2018

2012 was a decisive year for mobile videogames thanks to Clash of Clans. The smash hit from Supercell was, and continues to be, an enormous success that has blown way past anyone's expectations of what a mobile videogame could do. The strategy and management in Clash of Clans created a new style of videogame that since then, has been copied more times than we can count. With this thought in mind, we've put together a list of the best Clash of Clans alternatives that have been released up until 2018.
See more

Supercell, creators of the popular Clash of Clans and Clash Royale, have jumped back into the limelight with a bomb bit of news. They're developing a new video game called Brawl Stars. The company has already got several titles under its belt, but the success of Clash Royale has led them to carry on in this line – and no better to do it than with a MOBA.
See more

I love the game

I'm a fan of supercell games, but this latest bomm beach update has disappointed me a lot, the game closes by itself, and it's not my cell phone's problem, it's a Huawei P30, I'm not going to uninstal...

Car Parking Multiplayer
Drive around an extensive map for a realistic parking experience
Clash of Clans
Crush enemies and lead your clan to glory
Mobile Legends
An excellent, but shameless, League of Legends clone
Scary Teacher 3D
Escape the terrifying teacher!
Clash Royale
Clash of Clans characters face off in epic duels
Solar Smash
Launch attacks on these planets and destroy them all
Bus Simulator Indonesia
Drive a bus through Indonesia with this simulator
Vegas Crime Simulator
Try not to get caught breaking the law!
Advertisement